We tried Spur’s new drive thru. You won’t get a T-bone steak, but ribs are ready in 5 mins

In a statement this week Spur said, the company had come up with new menu innovations including snack meals such as “tripchips”, handheld breakfasts as well as roadhouse-style desserts on-the-go especially for those who never want to leave their cars.

The restaurant also has most of the traditional Spur restaurant menu along with the special drive through offers.

Globally, the drive-through alternative has become restaurants’ saving grace during the era of social distancing, while sit-down restaurants generally struggle to attract patrons, even when lockdown rules allow them to operate freely.

As soon as we drove into the Spur complex, we caught a whiff of the food cooking, that Spur flame-grill smell. A the name implies, it was a fairly quick and easy process to get our hands on the food… …with the order – from paying to collecting it – taking just a little over four minutes. 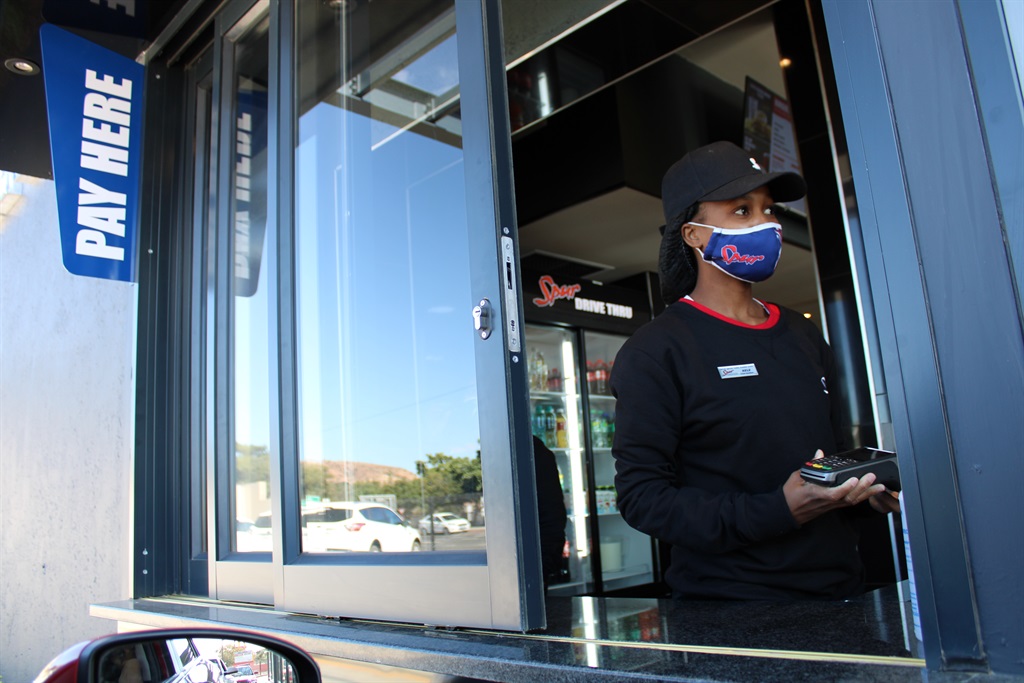 Then we paid at the second window. (Image: Business Insider SA/Ntando Thukwana)

We were starved and wanted to dig into a big meal, one of Spur’s most loved, the T-bone steak with some onion rings and chips. But, we were told the option was not available on the drive-thu menu and that we’d have to dine-in for it.

The meat options available were pork ribs and chicken combos, and so we settled for Spur’s 400g pork ribs with vegetables and chips. The vegetable order of butternut and spinach came hot in a takeaway box container…. A side of butternut and spinach. (Image: Business Insider SA/Ntando Thukwana)

…and the ribs in a foil-lined brown packet to retain the heat. The ribs in a brown packet lined with foil to retain heat. (Image: Business Insider/Ntando Thukwana) We wished the ribs came in a container. (Image: Business Insider SA/Ntando Thukwana)

As soon as we opened the ribs, we wished they had come in a box takeaway container though; to make for easy, on-the-go eating.

Then we finally got a plate. Then we finally got a plate. (Image: Business Insider/Ntando Thukwana)

As promised, the menu did have options not available on the Spur sit down menu such as boerewors and hotdogs and a selection of to-go desserts like the choc brownie one we got. Over an hour later, the cream and chocolate sauces had not melted into each other.

We loved the dessert; it wasn’t overpowering in sweetness and made for easy eating, although, you’ll probably have to eat it using a spoon to get the brownie from the bottom of the cup. So how do the menus differ? You won’t find all the burgers, for one.

We thought the drive-thru menu had a wide enough range of food options, from breakfast and all-day burgers to meat combos and boerewors rolls. The kids are catered for too, although, not extensively.

For committed red meat lovers, the menu might be tricky to select from though. You won’t find any of Spur’s steaks if you go via the drive-through option. Not the New York Sirloin, not the Cheesy Garlic Prawn Steak, not even a good old fillet cut.

For the burger enthusiasts, its quite a thin menu too, especially if you’re a fan of something more exciting like Spur’s Goodie Burger with a pineapple ring in the middle. The drive through menu only has five of the 19 burgers on the sit in menu. These are:

We were excited to see new additions not available in the restaurants. The menu has specialty items such as boerewors rolls, cheese griller hotdogs, and a hake and chips meal. Overall, we rate the drive-through option highly given the convenience it comes with. It’s not everynday that you get a rack of ribs prepped in five minutes.